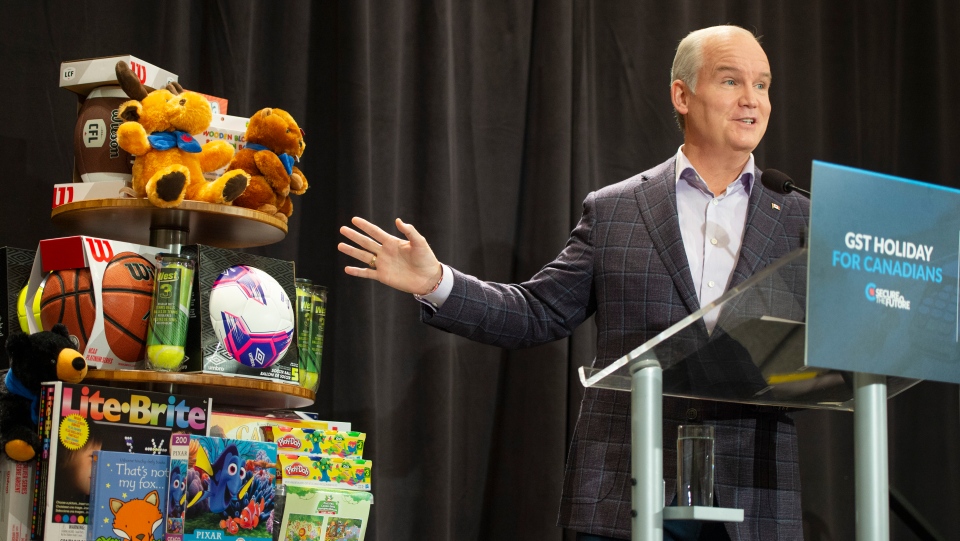 The federal Conservatives are proposing a "holiday" on the federal goods and services tax in December to boost retail spending, but experts question whether it's an effective use of government dollars.

The federal Conservatives are proposing a “holiday” on the federal goods and services tax in December to boost retail spending, but experts question whether it’s an effective use of government dollars.

Party leader Erin O’Toole said the policy would help Canadians who have been struggling to make ends meet during the pandemic, while also supporting businesses by encouraging spending.

“December is going to be the end of a very difficult year for Canada, and we think Canadian families deserve a break.”

The proposed plan would only apply to in-store retailers to prevent U.S. companies with large online presences from benefiting, O’Toole said.

He said the policy would represent $1.5 billion in savings for Canadians.

However, the Canadian Federation of Independent Business called the tax holiday “a bit gimmicky.”

“What a short-term GST holiday would likely do is shift sales from one month to another, leading to very little change in overall consumer spending,” CFIB president Dan Kelly said in a statement.

Kelly also questioned how the break on in-store purchases only would work and said small firms would have the hassle of reprogramming their point-of-sale machines.

“The Tories have made many strong small business platform promises, such as significantly expanded (Canadian Emergency Business Account) loans, but the GST holiday is not one of them,” Kelly said.

A GST holiday would represent a five per cent savings on many purchases across the country.

The Retail Council of Canada, which advocates for retail businesses in the country, echoed the CFIB’s concerns over a one-month tax holiday in December.

“Consumers would hold off spending wherever possible while waiting for the tax holiday to begin,” said Karl Littler, senior vice-president of public affairs with the RCC. “The last thing retailers are looking for is to flatten their sales in the fall.”

The council said it would like to see longer term supports that stretch into 2022.

Documents obtained by The Canadian Press under the Access to Information Act suggest that the Trudeau Liberals have also sought ways to use federal spending powers to spur consumer spending during an economic recovery from COVID-19.

Canadians households, buoyed during the downturn by federal aid, have amassed unprecedented levels of savings that were expected to be spent starting this summer as public health restrictions eased.

A briefing note to Finance Minister Chrystia Freeland ahead of her April 27 phone call with her counterparts from the United States, United Kingdom, Australia, and New Zealand — known with Canada as the “Five Eyes” — provided her with talking points about the “role of fiscal policy to unlock household savings.”

“When the pandemic recedes, a release of pent-up demand could translate into a tangible temporary boost to real output as hindered sectors such as entertainment, air transportation, tourism, and restaurants are able to operate at a higher capacity,” Finance officials wrote to Freeland in the note.

“However, there is uncertainty surrounding the potential use of accumulated savings, as some households may use them to pay down debt or invest in assets.”

Large portions of the briefing note have been blacked out because the department considered them sensitive information that can’t be made public.

The Bank of Canada’s most recent survey of consumer expectations found that respondents on average planned to spend just over one-third of their excess savings in the next 12 months, mostly on going out to restaurants and social activities that have been limited by lockdowns.

David Macdonald, senior economist with the Canadian Centre for Policy Alternatives, also agreed it’s not a bad idea to give people incentives to spend money and boost certain sectors of the economy, but a GST break is not the most targeted way to do it.

“I guess the question is what’s the goal of this policy. Is it to save people some money on expenditures or to move money into people pockets, or is the goal of the policy to try to improve economic growth,” Macdonald said.

“If the goal of the policy is to improve economic growth, particularly in sectors that are hardest hit, this isn’t terribly effective policy.”

He said a tax holiday in December is effectively subsidizing purchases that would’ve happened whether or not the tax break was in place.

He said a more effective option would be to implement the tax holiday in January or February to spur spending during a period when retailers typically have a harder time.

Kevin Page, president of the Institute of Fiscal Studies and Democracy in Ottawa and a former parliamentary budget officer, questioned the need for a short-term stimulus measure when there has already been a significant economic rebound and many existing stimulus measures.

“Given the strong rebound and significant fiscal stimulus already baked in the cake, do we really need more short term stimulus type measures?” Page said in an emailed response.

Page said the tax holiday would also come with a hefty price tag, but added the policy secures political points ahead of the holiday shopping season.

— With files from Jordan Press